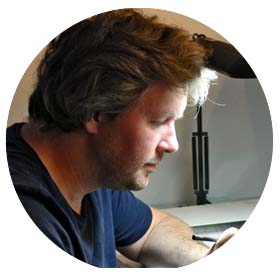 When did you start modelling?
I built my first model when I was 6 years old. Well, probably my mother did most of the work, as I wasn’t allowed to handle the sharp knife necessary to separate the parts from the sprues yet. We used Velpon generic contact glue, which we had in the house to repair broken coffee cups and tableware.
I kept building models as a child, including AFV’s, aircraft, modern warships and ships from the age of sail. But when I discovered the first Verlinden books around the age of 13, I instantly knew I wanted to build dioramas and that is what I have been doing for the subsequent 26 years. Even when creating a single figure, in my mind, it is always a little diorama. I joined a club, KMK, when I was 19, which opened my eyes to the world. Exchanging ideas and techniques at club meetings and travelling to modelling shows has been a tremendous help to evolve as a modeller, as well as a lot of fun!

What is your favourite subject?
My last and current projects both centre around aircraft carriers in the WWII Paci c war. In the past, I have worked around WWII German armour, figures and vignettes with WWI French, Belgian, Congolese, British, Ot- toman and German troops. I have also done one GI in Vietnam, a portrait of Frank Zappa, a couple of animals, 2 boxed dioramas with scenes from everyday life. I have also done some pieces which are a bit ‘out of the box’ and hard to relate to a certain historic, or even fantasy, subject. To me, whatever can tell a good story can be a good subject!
Over the years, I have shifted from AFV dioramas to single figures and figure vignettes, then to boxed dioramas and now I’m doing ship dioramas. Who knows what will be next? But to me, it essentially always remains the same: dioramas that tell a story and whatever happens to be included in them (vehicles, figures, ships, animals, buildings, plants, etc.) are always equally important for a satisfying result.

When it comes to painting and weathering, which paints do you prefer: acrylics, oils or enamels?
I have worked mostly with Humbrol enamels, both for base-coating and weathering vehicles, groundwork and figures. For a lot of projects, I used them exclusively, and I still like them a lot. The last couple of years how- ever, I have been including more and more acrylics for figure painting and also for air- brushing my current ship project. I have also just purchased a nice collection of Abt501 oils for weathering my current ship project.

What is your favourite technique?
I strongly feel that no individual technique is indispensable. There is always another technique that can get you the same end result. Moreover, I think it is much more important to combine the different techniques properly. Only by layering different effects to a realistic blend, we can end up with a model that that really speaks, instead of only showing a nice application of one or more techniques.
That said, I do like to put a lot of attention on shading and highlighting of every detail in a model, probably more than many other modellers. This results in models that look crisp and detailed, luminous and with a lot of depth and 3D-feel in the flesh, as opposed to only looking good on a photograph. I prefer to handpaint all the shadows and highlights with a fine brush, as opposed to (pin)washes and drybrushing. This gives me maximum control and allows me to apply zenithal lighting not only on figures, but on everything in a diorama.

When finishing a model does it have to be ultra realistic or can you appreciate some artistic freedom?
I do like to get all the details of my models as (historically) correct as I can. It is always fun to research the subject, and I think it helps the model get a realistic feel, which in turn helps the model tell its story.
But there is much more to a realistic feel of a model than shrinking the real thing 35 times or more and there is more to telling a story with a model too. Therefore, I don’t see any problem in modifying colours for scale effect or atmosphere, exaggerating or reducing certain weathering effects, making a road narrower or a slope steeper, etc. I do it all the time!

We use cookies to personalise content and ads, to provide social media features and to analyse our traffic. We also share information about your use of our site with our social media, advertising and analytics partners who may combine it with other information that you've provided to them or that they've collected from your use of their services. It is possible to change/withdraw the consent at any time. Check Cookies Privacy here.

This website uses cookies to improve your experience while you navigate through the website. Out of these cookies, the cookies that are categorized as necessary are stored on your browser as they are essential for the working of basic functionalities of the website. We also use third-party cookies that help us analyze and understand how you use this website. These cookies will be stored in your browser only with your consent. You also have the option to opt-out of these cookies. But opting out of some of these cookies may have an effect on your browsing experience.
Esta tienda web utiliza cookies para mejorar su experiencia mientras navega por el sitio web. De estas cookies, las que se clasifican como necesarias se almacenan en su navegador, ya que son esenciales para el funcionamiento de las funcionalidades básicas del sitio web. También utilizamos cookies de terceros que nos ayudan a analizar y comprender cómo utiliza este sitio web. Estas cookies se almacenarán en su navegador solo con su consentimiento. También tiene la opción de optar por no instalar estas cookies. Pero la exclusión voluntaria de algunas de estas cookies puede tener un efecto en su experiencia de navegación.
Necessary Always Enabled
Necessary cookies are absolutely essential for the website to function properly. These cookies ensure basic functionalities and security features of the website, anonymously.
Others
Other uncategorized cookies are those that are being analyzed and have not been classified into a category as yet.
Advertisement
Advertisement cookies are used to provide visitors with relevant ads and marketing campaigns. These cookies track visitors across websites and collect information to provide customized ads.
Analytics
Analytical cookies are used to understand how visitors interact with the website. These cookies help provide information on metrics the number of visitors, bounce rate, traffic source, etc.
Functional
Functional cookies help to perform certain functionalities like sharing the content of the website on social media platforms, collect feedbacks, and other third-party features.
Save & Accept